WIT has built-in support for a variety of models: TF Estimators, those served by Cloud AI Platform Prediction, and those served by TensorFlow Serving. But, many ML practitioners have models that don’t fit into those constraints, such as Keras models, and those using non-TensorFlow frameworks such as PyTorch, XGBoost, and sklearn.

In order for WIT to be usable for all practitioners, WIT has the ability to accept any python function that performs model predictions. This function can return more information than just model prediction scores, such as feature attributions, as shown later in this tutorial.

The interface of the custom prediction function you must provide to WIT is slightly different based on whether you are using WIT inside of a notebook or in TensorBoard.

In both cases, the output of the function can be a list of model predictions, with a single element for each datapoint passed to the function. For regression models, the list element should contain just a single number. For classification models, the list elements should contain lists which represent the class scores for all classes outputted by the model. So, for a binary classifier, each returned list item is a list of length 2, with the first element being the class score for class 0 and the second element being the class score for class 1.

A (random) custom prediction function for WIT in notebooks

When using a custom prediction function in TensorBoard, there is a second function input: the ServingBundle object, as defined in utils/inference_utils.py. This object contains the information about the model, such as the model type, model name, and inference address, which a user provides on the WIT setup dialog when used inside of TensorBoard. This can be used to determine which model to perform inference on, in the case of using WIT to compare two models with custom prediction functions in TensorBoard.

A (random) custom prediction function for WIT in TensorBoard

Custom prediction functions can also return extra information that WIT will use to enhance its capabilities. The below sections explore returning feature attributions and returning other extra outputs from the model.

To do this, instead of returning a list of scores from the custom prediction function, the function should return a dictionary, where the predictions list explained in the previous section is stored under the key predictions, and the attributions are stored under the key attributions. The attributions should also be a list with one entry per datapoint. Each entry should be a dictionary with the keys being the names of the input features to the model (matching the features in the input data), and the values being the attribution scores for those features for the specific datapoint. For single-valued features (where each feature contains a single value as a number or string), the attribution should be a single number for that feature. For multi-valent features, such as can be specified in a tf.Example feature value list, the attribution for that feature should be a list with an attribution score for each feature value in the input datapoint. This notebook shows a custom prediction function doing binary classification with a keras model and using the shap library to generate feature attributions. 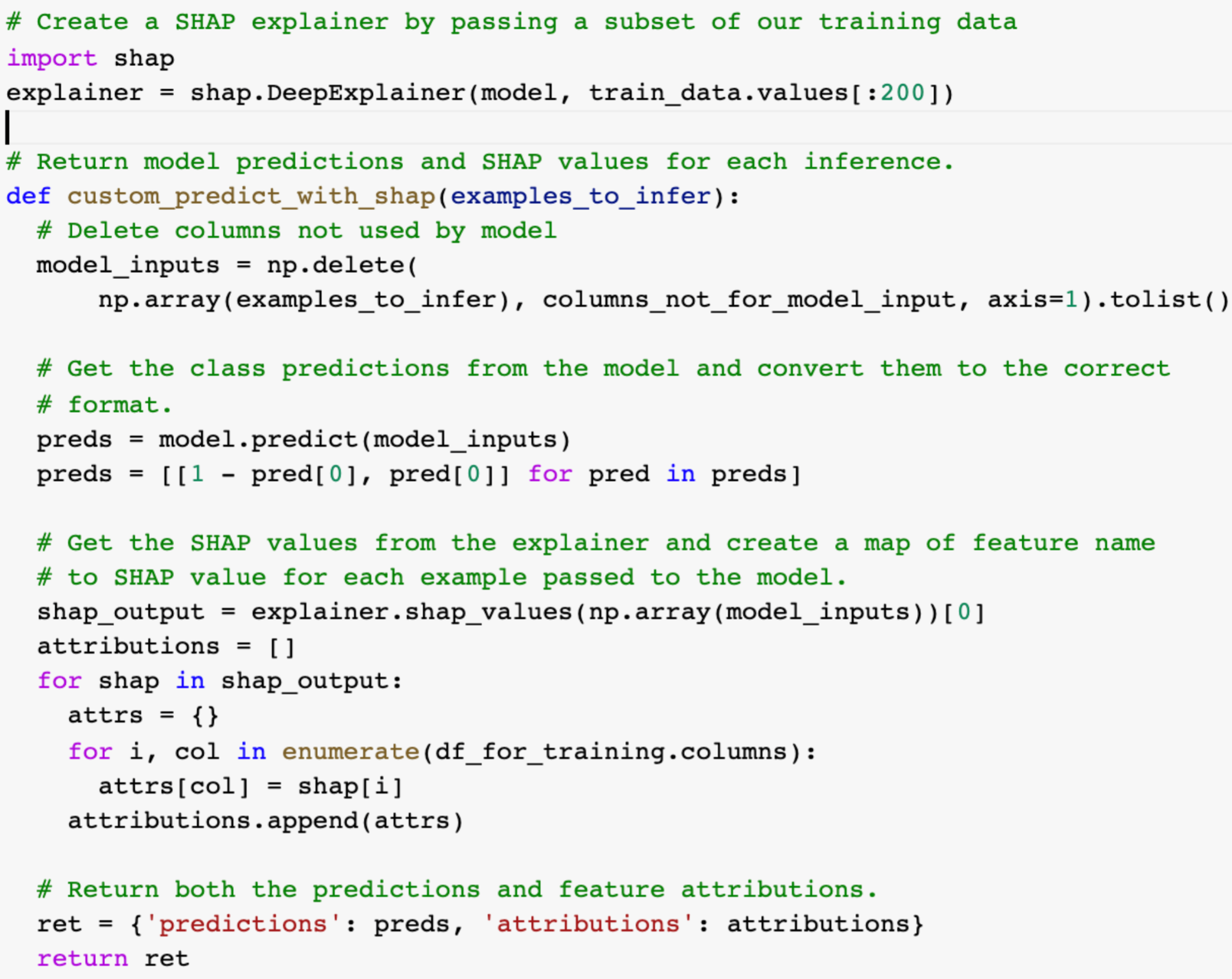 A custom prediction function for WIT in notebooks with Shapley value attributions.

Any returned metrics will be listed in the datapoint viewer in the Datapoint Editor, just like the feature values area, and also usable for creating charts in the datapoints visualization, and for slicing datapoints in the Performance workspace.

time to read
15 minutes
use with
Classification models
Multi-class models
Regression models
before you begin
Have a trained model and test dataset for analyzing.
related demos
Binary Classification Model: Smile Detector in Images
takeaways
Learn to use the What-If Tool with arbitrary python functions, and how to include feature attributions in the analysis.
what-if questions
How do I use the What-If Tool with my model code?

How do I add feature attributions to the What-If Tool?
The What-If Tool is being actively developed and documentation is likely to change as we improve the tool. We want to hear from you! Leave us a note, feedback, or suggestion on our community group.