Getting Started in TensorBoard

The What-If Tool can be found inside of TensorBoard, which is the visualization front-end that comes with each TensorFlow installation. The dropdown menu in the top-right of TensorBoard contains an option to navigate to the embedded instance of the What-If Tool.

To use the What-If Tool inside of TensorBoard, you need to serve your model through TensorFlow Serving’s prediction service API, in which models accept TensorFlow Example protocol buffers as input data points, or you can provide your own custom python function for generating model predictions. See TensorFlow Serving documentation for more details. The dataset to use in the tool must be stored as a TFRecord file on disk, in a location accessible to the running TensorBoard instance. The file to load must either be under the log directory provided to TensorBoard on startup, through the logdir=PATH flag, or you can add another path that the tool can load files from through use of the -whatif-data-dir=PATH flag. Not all models meet these criteria, and for those models, the What-If Tool can still be used in notebook mode, outside of TensorBoard.

When opening the What-If Tool in TensorBoard, you will encounter a setup dialog which allows you to point the tool to your model(s) to analyze and the dataset for the analysis, among other options. 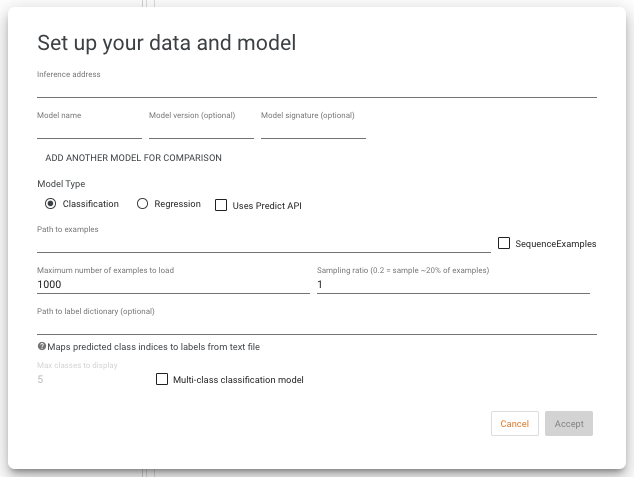 Above: The setup dialog for the What-If Tool inside of TensorBoard

Use the radio buttons to indicate if the model is classification or regression. For multi-class classification, also check the “multi-class” option, and optionally provide a maximum number of highest-scoring classes to display for each data point (in the case of models with a large number of possible classes).

If the served model uses the TensorFlow Serving Predict API (as opposed to the standard Classify or Regression APIs, then check the “uses Predict API” checkbox and provide the names of the input and output tensors that the What-If Tool should use for sending data points to the model, and for parsing model results from the output of the model.

For using the tool to compare two models, click the “add another model for comparison” button and fill out the model information for the second model in the same manner.

For classification models, by default the classes are displayed as “class 0”, “class 1”, and so on. You can optionally give string labels to each class by providing a label dictionary file, to provide a better experience to users trying to understand the model’s outputs. This dictionary file is just a text file that has a string on each line, and has a line for every class that the model can return. If you provide the path to this file in the appropriate input field on the setup dialog, the tool will display those user-friendly class names throughout, as opposed to the class indices.

Instead of using a model through TensorFlow Serving, you can provide your own python function for the What-If Tool to use for making predictions. To do so, launch TensorBoard and use the --whatif-use-unsafe-custom-prediction [file path] runtime argument to provide a path to the file containing your prediction function. The file must contain a function with this name and signature: def custom_predict_fn(examples, serving_bundle):. The function takes in a list of examples to predict, along with the serving_bundle object which contains setup information from the tool, such as the inference address, model name, and model type provided during tool setup. The function should return a list of model outputs, one per each example provided. For regression models, the list item should be a single number. For classification models, the list item should be a list of numbers, one per each possible class.

Using the What-If Tool Without a model
You can use the What-If Tool without a served model, to just analyze a dataset. The dataset can even contain results from running a model offline, for use by the What-If Tool. In this case, since there is no model to query, some features of the tool, such as partial dependence plots, will be disabled.

You can specify a maximum number of data points to load from the file, which defaults to 1000. The tool loads the data starting from the beginning of the file until it reaches the end, or the maximum number of examples specified. If you wish to use sampling to not just grab the data points of the front of the file, you can set the sampling ratio to a number above 0 and below 1. This number represents the chance that a given data point will be loaded and sent to the tool. So, with maximum examples set to 1000 and a sampling ratio of 0.2, the tool will start at the beginning of the file and for each data point it encounters, it will load that data point with a likelihood of 20% (and it will skip that data point with a likelihood of 80%). It will continue in this manner until 1000 data points are loaded, or the end of the file is reached.

time to read
10 minutes
use with
Classification models
Multi-class models
Regression models
before you begin
Have a trained model for serving through TensorFlow Serving and a test dataset on disk as a TFRecord file.
related demos
N/A
takeaways
Learn to use the What-If Tool inside of TensorBoard.
what-if questions
What are the limitations of using the What-If Tool in TensorBoard?

How do I use the What-If Tool in TensorBoard?
The What-If Tool is being actively developed and documentation is likely to change as we improve the tool. We want to hear from you! Leave us a note, feedback, or suggestion on our community group.