While evaluating the overall performance of a model gives some insight into its quality, it does not give much insight into how well models perform across groups nor where errors truly reside. To better understand the outcomes of a model, the What-If Tool provides a confusion matrix for comparing the prevalence of different types of model results.

A confusion matrix illustrates the match and mismatch between the prediction of the model(s) and the corresponding actual outcomes. This is accomplished by keeping count of all the times the model(s) succeeded and failed in predicting the outcome with respect to the ground truth. These outcomes are then placed in a contingency table that summarizes the relationship between Predicted (what the model says) and Actual (what the ground truth says) outcomes.

Available only for classification-type models, the What-If Tool automatically generates a confusion matrix table, located in the Playground section of the Performance & Fairness workspace: 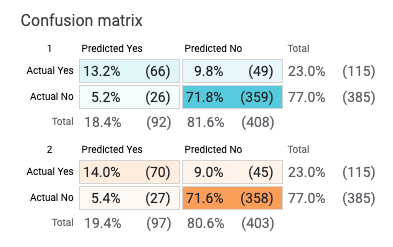 In this example, the confusion matrix is depicting the outcomes of two binary classification models trained using the same dataset: a linear (blue) and a deep neural net model (orange). Both models are tasked to predict whether someone is likely to earn more than $50,000 in annual salary based on data from the US Census.

Using positive and negative to describe classes.
Positive and Negative in this context should not be interpreted as value judgments. We are not suggesting that someone who earns more than $50,000 a year is a better person than someone who earns less than $50,000. They are just standard terms used to distinguish between the two possible predictions the model can make.

As such, the confusion matrix in the What-If Tool captures the following states:

The What-If Tool can also expand the confusion matrix for multi-classification cases:

With these outcomes computed, the What-If Tool then calculates a variety of performance metrics that take the values from the confusion matrix as input to describe more generally what is happening with the model. These performance metrics include the following:

These performance metrics are displayed beside (Precision, Recall) or above (Accuracy, F1) the confusion matrix in the same Playground:

In addition to comparing performances between two models, the What-If Tool, with its Slice by option in the Configure module, offers the capability of producing a confusion matrix and associated metrics for any group in the dataset that can be defined by a single feature’s values or a cross of two features. 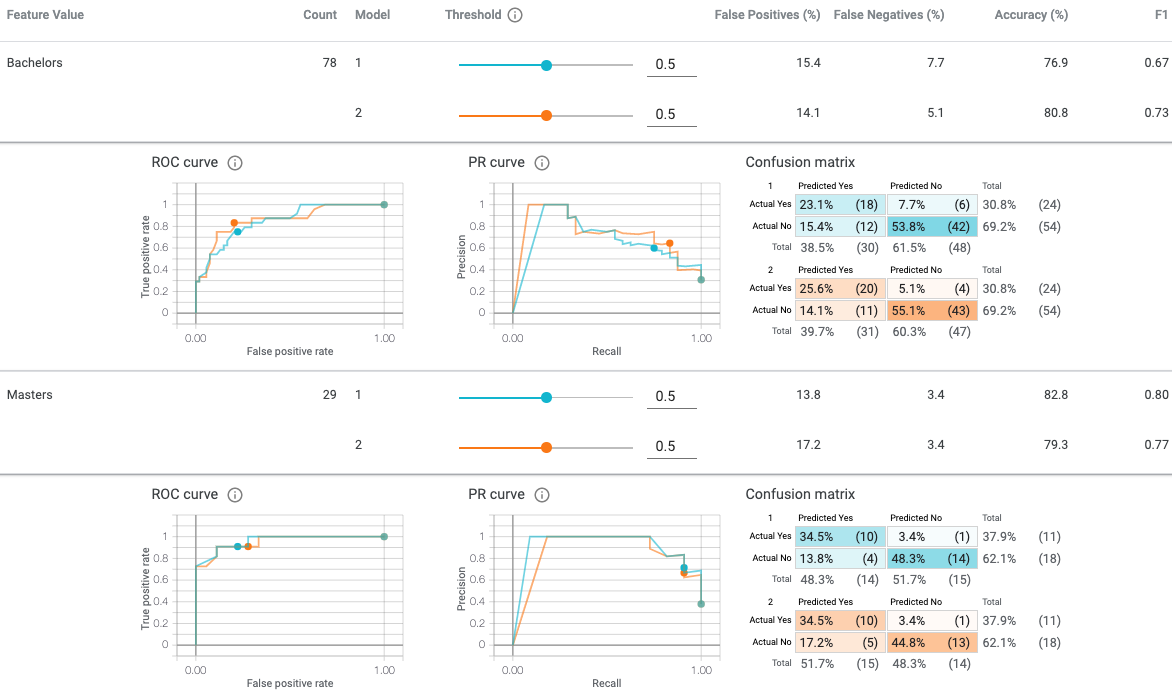 In this running example, exploring the performance metrics with respect to Education might reveal where the model overperforms and underperforms, as well as how represented these groups are in the dataset.

While it may seem daunting at first, this level of information is needed to better understand the relationship between performance metrics and desirable outcomes. The What-If Tool provides such interactive visualizations without additional overhead to make it easier to ask questions about model performances.

Learn about what a confusion matrix is, its purpose, how it’s calculated, and how to read it.
what-if questions
In summary, how well does the model perform?

How often does the model correctly predict any label?

How often does the model correctly predict the positive label?

Out of all the available positive labels, how many did the model correctly identify?

How does the model perform with respect to a subgroup?
The What-If Tool is being actively developed and documentation is likely to change as we improve the tool. We want to hear from you! Leave us a note, feedback, or suggestion on our community group.